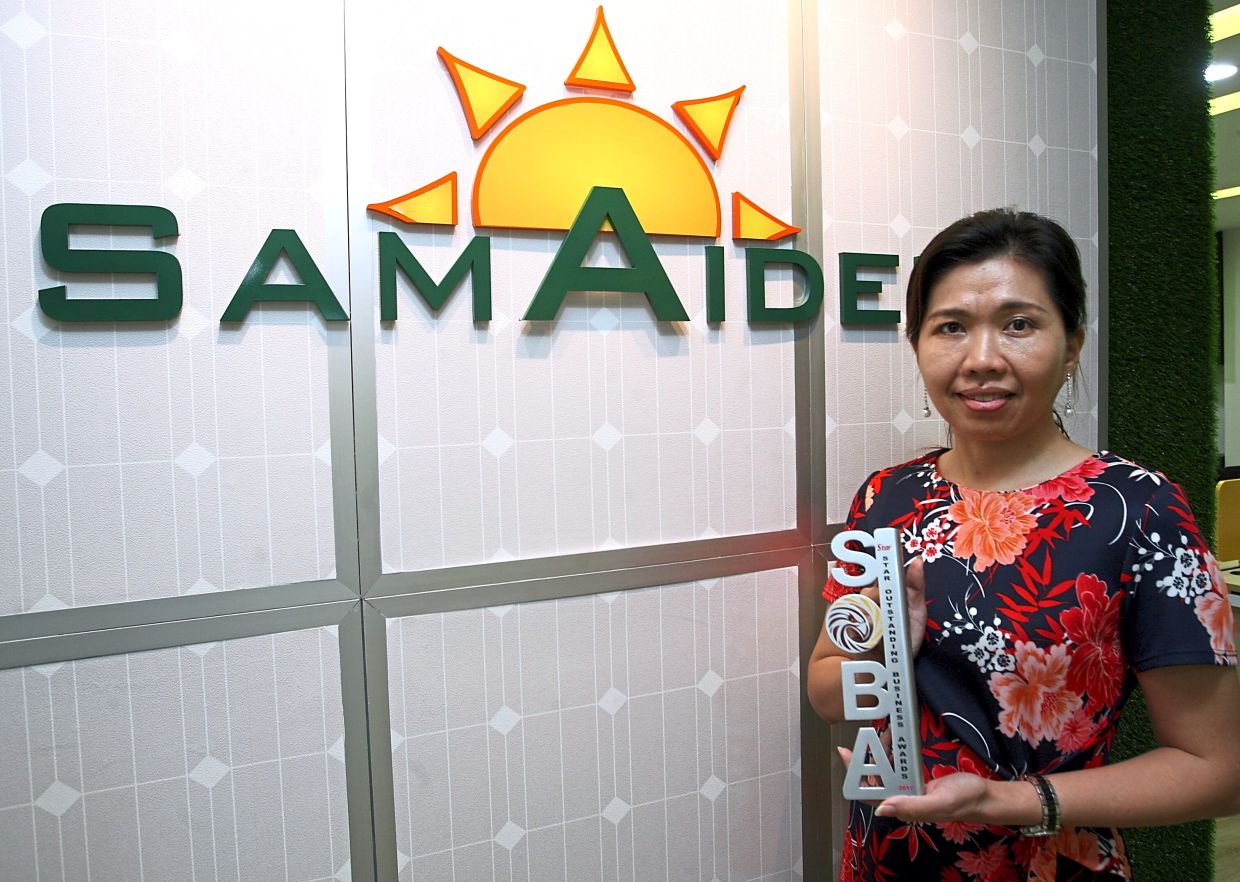 THE listing of Samaiden Group Bhd could not have come at a better time. The company specialises in the renewable energy (RE) sector, which is in vogue this year.

In fact, the Jimah East power plant built by Tenaga Nasional Bhd and which was operational last year will be the last coal-fired power plant in the country.

No wonder then that Samaiden’s share price has enjoyed a tripling since its 48-sen initial public offering in mid-October. The stock closed at RM1.50 on Friday.

It should be noted that Malaysia has been moving towards large-scale RE since 2016 with the commissioning of a number of large-scale solar (LSS) projects.

This is when Samaiden began to build its track record. The group bagged a contract to build a 23.70-MW solar photovoltaic (PV) plant in Penang for the first LSS (LSS1) programme worth RM97.7mil.

This followed by the group winning more solar projects in LSS2.

Group managing director Chow Pui Hee tells StarBizWeek that Samaiden has now taken the step to become an operator of a solar power plant by bidding with other consortium partners for the upcoming LSS4 project.

“We expect the award of the LSS4 to be coming in the first quarter of next year, ” she says.

Samaiden is mainly involved in the engineering, procurement, construction and commissioning (EPCC) of PV systems and power plants.

When asked about solar players throwing prices when bidding for LSS jobs, Chow says that technological advancement has reduced the cost of solar panels and enhanced the efficiency of electricity generation compared to eight years ago.

Other listed companies involved in the EPCC of solar plants include Kumpulan Powernet Bhd, Solarvest, Cypark Resources and Megafirst Corp.

Aside from solar projects, Chow says that Samaiden is also involved in biomass and biogas RE projects.

Earlier this month, the group received the approval from the Sustainable Energy Development Authority (Seda) to undertake the development of a 1.2-megawatt biogas power plant in Bachok, Kelantan via its 60%-owned subsidiary SC Green Solutions Sdn Bhd.

Chow says that the cost of the plant will be about RM25mil which will be funded via internally generated funds and bank borrowings.

This is the first biogas plant on a build-own-operate basis for Samaiden. This plant has a 21-year concession from Seda with an effective feed-in-tariff of 39.63 sen per KW.

This will also be the first RE plant managed by Samaiden, Chow says.

It is noteworthy that a few days before the biogas award, Samaiden announced that it had secured a RM115.6mil contract to develop a 10MW biomass power plant in Teluk Kalong, Terengganu.

Overall, Samaiden has an orderbook of RM147.5mil that will last until 2023.

Its revenue for the year was higher by 11.5% to RM76.17mil from RM68.3mil previously. On a back-of-the-envelope calculation, Samaiden has been able to achieve profit margins of between 9.5%-11% from its business activities.

At the time of its listing in mid-October on the ACE Market of Bursa Malaysia, Samaiden was priced at 48 sen per share which valued it at 13.9 times its earnings for FY20.

However, with its share price having tripled since then, the stock now trades at almost 50 times its FY20 earnings.

Moving forward, Chow says that the group will continue to bid for solar-related projects despite the growing numbers of other RE projects.

“We expect about 30MW of biogas and biomass projects to be awarded by Seda in 2021, ” she says.

She adds that the group is also planning to expand its footprint regionally starting with Vietnam and looking opportunities in Sabah.

The company was founded by Chow in 2013 with a focus on roof-top solar installation and RE consultation.

“I wanted to start my own business by working on small-scale solar projects and I thought that this would give me some free time. But opportunities came streaming in, especially after 2016 when more LSS projects came about, ” she says.

Chow notes that the company’s name Samaiden is a combination of her sons’ names – Sam and Aiden.

Chow has 19 years of experience in the RE space. After graduating with a Chemical Engineering degree from Universiti Putra Malaysia, she started her first job at a water treatment company that focused on industrial waste from palm oil mills.

“In 2001, many young engineers went into the oil and gas (O&G) industry because of the high salary. But I was not interested in the (O&G) industry as it is very structured. I wanted to challenge myself and decided to go into an industry related to the environment, ” she says.

Chow then became an environmental consultant which saw her turn a large-scale landfill into a solar farm.

“You could not build anything on that land as it was once a landfill. That is when we decided to turn it into a solar farm, ” she says.
Join our Telegram channel to get our Evening Alerts and breaking news highlights